Chinese troops have withdrawn from the area where they clashed with Indian troops in the Galwan Valley, according to the latest satellite images.

The images, taken on Tuesday by Colorado-based satellite imagery company Maxar Technologies, appear to show that Chinese tents, vehicles, and troops previously stationed at strategic locations have pulled back, while a wall on the Indian side has gone.

Both sides stated their commitment to disengaging their troops along the Line of Actual Control in statements issued after their discussion.

Previous satellite images appeared to show that Chinese soldiers had built temporary structures at Hot Springs and Gorga, two friction points in the disputed Galwan Valley area, but the new images show empty roads and no new construction or human activity in the forward area.

The Times of India, citing high-level sources in the India military, reported that there would be a three to four-week “stabilisation” period when both sides would monitor each other and continue to meet to try to iron out problems.

Other Indian media have said their troops have withdrawn 1.5km (just under a mile) and hoped to create a “buffer zone”.

The border dispute between the two countries dates back decades, with each occupying territory claimed by the other, and they cannot even agree on the precise location of the Line of Actual Control that serves as the effective frontier.

Tensions have been rising since early May and talks to the defuse the tension in early June came to nothing following a deadly clash near Pangong Tso lake on June 15, when 20 Indian soldiers were killed and China suffered an undisclosed number of casualties.

Analysts said China wanted to handle the crisis in a low-profile manner and avoid stirring up nationalistic sentiment at a time when its relations with the United States are deteriorating.

Liu Zongyi, head of the South Asia Research Centre at the Shanghai Institutes for International Studies, said both sides had agreed to disengage because: “China does not want to go to war and India does not have the ability to fight one.”

But no detailed plan to de-escalate tensions has been released and observers said the road ahead for China-India relations is still bumpy.

A statement released by the Chinese Foreign Ministry following the talks between Wang and Doval said both sides should not see each other as a threat, but China has recently sent advanced high-altitude weaponry to the border. 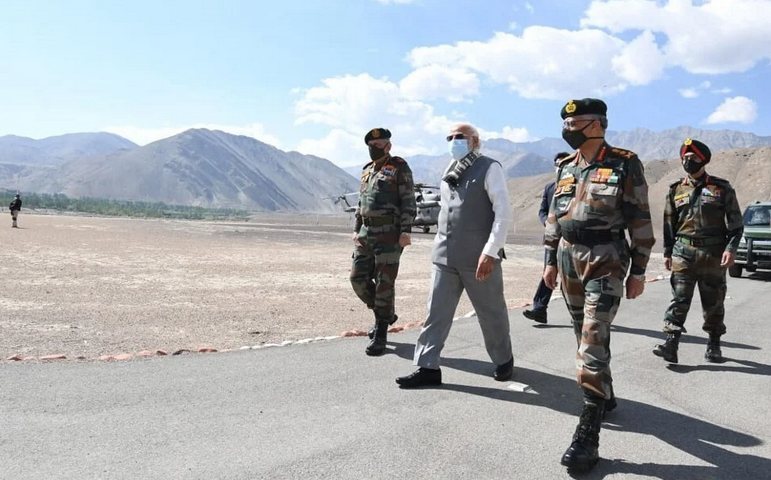 Meanwhile, Indian Prime Minister Narendra Modi visited troops in Ladakh last week and took a veiled swipe at China, saying “the age of expansionism” was over.

Liu warned that a tough, nationalistic Indian stance would make it hard to maintain peace, saying: “Modi needs to cool down anti-China sentiment in India or else it will be difficult for both sides to respect the stabilisation period.”

Srikanth Kondapalli, a professor of Chinese Studies at Jawaharlal Nehru University in New Delhi, said nationalist sentiment was playing a role in the border tensions at Galwan but noted that India was merely “matching” Chinese nationalism.

“Nationalism is strong under Modi and Xi Jinping, this is a ground reality. This is to be expected because both nations are modern states that have only been around for 70 years or so,” said Kondapalli.

He also doubted whether the current de-escalation would be enough to resolve the core problems that have led to repeated flare-ups along the border, saying: “We have to revisit this after a month and see if demobilisation has happened.”

He said the agreement between Wang and Doval had a “higher legitimacy” than one reached between military commanders, but the undemarcated border could itself become a point of contention between the two sides.

“Some reports say that both sides agreed to withdraw three kilometres [1.9 miles], but because the Line of Actual Control is in itself a contentious issue, three kilometres from where exactly?” said Kondapalli.